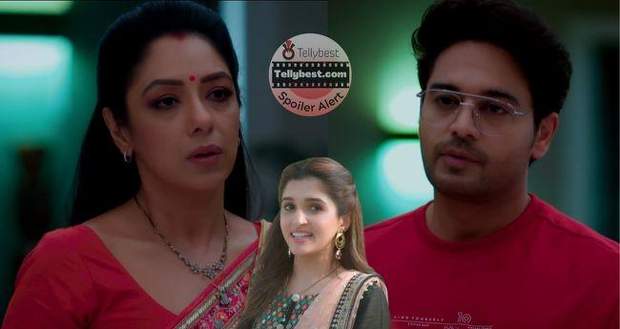 In the upcoming story of Anupama, Kinjal will resolve the fight between Anuj and Anupama.

The current track of Anupama revolves around Anuj and Anupama getting into an argument with each other due to Pakhi’s issue.

Adhik has asked Pakhi to have a break from their relationship as he needs some time for himself.

According to the latest twists of Anupama, Kinjal and Pari will arrive at the Kapadia mansion to accompany Anupama and Anu to the Christmas trip.

Kinjal notices the silent tension between Anuj and Anupama and decides to give them the opportunity to resolve the matter between themselves.

Kinjal takes Anu and Pari with her and signals Anupama to talk to Anuj before she leaves.

As Anupama and Anuj talk to each other, they eventually admit their faults and end their argument as both of them are mature adults.

Anuj wishes Anupama a happy trip and says that he will miss her in the meantime.

Anupama also gives a loving hug to Anuj and asks him to eat and sleep properly while she is away.

Let us see how Anuj and Anupama handles Pakhi and Adhik’s situation in the upcoming episodes of Anupama.

© Copyright tellybest.com, 2022, 2023. All Rights Reserved. Unauthorized use and/or duplication of any material from tellybest.com without written permission is strictly prohibited.
Cached Saved on: Wednesday 25th of January 2023 10:39:38 AMCached Disp on: Wednesday 1st of February 2023 08:57:10 PM