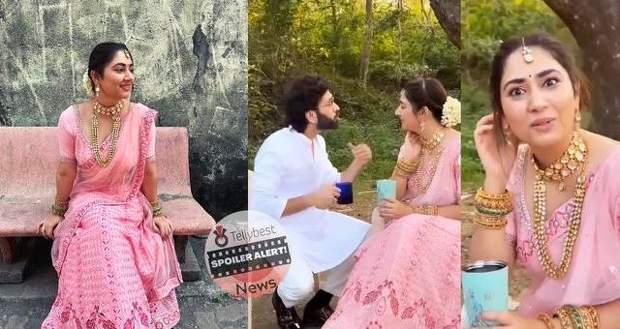 In the upcoming story of Bade Acche Lagte Hain 2, Ram and Priya (RaYa) will have a runaway wedding.

So far in the story of BALH2, Nandini, Vedika, & Shubham try to devise a plan to get Kapoor's property divided under their name.

Meanwhile, Ram and Priya get closer and decide to get married while Nandini gets jealous, thinking her obedient son is drifting apart from her suffocating control.

According to the latest spoilers of BALH2, Ram will receive a letter written by Pihu through Nandini where she states that she & Priya are going on an adventure.

However, it is not confirmed whether it is genuinely written by Pihu or this is another plan hatched by Nandini.

As per the latest gossip of BALH 2, Ram will go out to find Pihu and Priya, departing from the Mandap.

It could be that Priya and Pihu could be in jeopardy and this is all planned by Nandini to prevent RaYa from getting married.

In the future story of BALH2, it looks like Ram will find Priya & Pihu safe with the help of Krish, and RaYa will get married secretly, not in Kapoor Mansion.

Let us see what the upcoming episodes of Bade Acche Lagte Hai 2 bring to the table with Nandini's plan failing again, RaYa's successful wedding, and Pihu getting her happy family back.

© Copyright tellybest.com, 2022, 2023. All Rights Reserved. Unauthorized use and/or duplication of any material from tellybest.com without written permission is strictly prohibited.
Cached Saved on: Monday 21st of November 2022 01:02:38 PMCached Disp on: Wednesday 7th of December 2022 03:05:23 PM