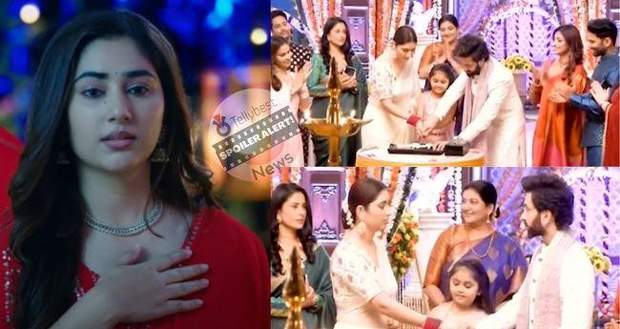 In the upcoming story of Bade Acche Lagte Hai 2, Ram and Priya will be seen dancing to the song, ‘Ghar More Pardesiya’ on the occasion of Dussehra.

So far in the story of BALH2, Ram arrives at the surprise party organized by Pihu a little late due to the traffic.

However, Pihu’s worries shake off when Ram arrives and she pushes him to get ready in a traditional sherwani to match Priya’s outfit.

As per the latest spoilers of BALH2, Pihu will also remind Ram that it is his and Priya’s marriage anniversary too, making him feel flustered.

According to the future story of BALH2, Pihu will urge both her parents to dance.

Ram and Priya will reluctantly hold each other’s hand, feeling shy but afterward, they will dance their hearts out to Ghar More Pardesiya with Priya against Ram’s chest as he twirls her.

Let us see how Dussehra brings Ram and Priya closer with little Pihu making sure to bring them together in future episodes of BALH2.

© Copyright tellybest.com, 2022, 2023. All Rights Reserved. Unauthorized use and/or duplication of any material from tellybest.com without written permission is strictly prohibited.
Cached Saved on: Monday 21st of November 2022 09:35:14 PMCached Disp on: Tuesday 6th of December 2022 12:43:39 PM