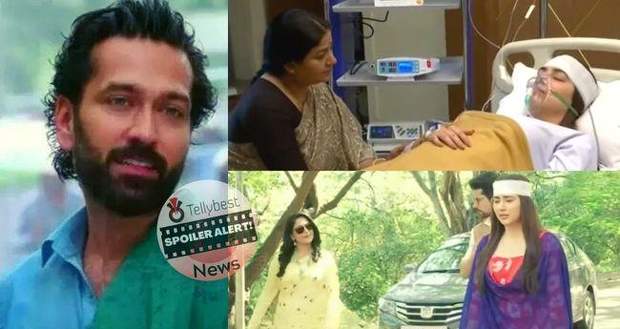 In the upcoming story of Bade Acche Lagte Hai 2, Ram will lose his memory and forget both Priya and Pihu.

So far in the story of BALH 2, Vedika kidnaps Priya and Pihu in Ram's farmhouse while Nandini pushes Vedika under the bus after she gets to know that Ram has signed all the property under her and Shubham's names.

Ram along with Krish arrives at the farmhouse to release Priya & Pihu from Vedika's lockup.

However, as per the latest spoilers of BALH2, after leaving the farmhouse safe & sound, Priya & Ram get into a car accident.

Priya's head will get hurt as she will be put on the ventilator while Ram's condition is no less than sad.

Meera, Sarah, Sandy, Ishaan, & Pihu will be there to support Priya as she asks about Ram's condition.

In the upcoming twist of BALH2, Ram loses his memory, unlike Priya who still retains them.

Nandini will mock Priya who arrives at the accident spot along with Krish to know whether this accident was planned or not.

She will tell Priya that her Ram is no more her Ram and that she & Pihu doesn't exist for him anymore.

The loyal viewers of BALH 2 have already given their verdict to the makers that they won't watch the show if RaYa gets separated again.

They want to see the poverty track that was shown in Bade Acche Lagte Hain Season 1 or another track where Nandini's duplicity is exposed & RaYa is back together!

Let us see whether Ram has really lost his memory or if the makers are planning to use this amnesia track to expose Nandini in future episodes of BALH2.

© Copyright tellybest.com, 2022, 2023. All Rights Reserved. Unauthorized use and/or duplication of any material from tellybest.com without written permission is strictly prohibited.
Cached Saved on: Monday 21st of November 2022 01:13:03 AMCached Disp on: Wednesday 7th of December 2022 11:30:48 AM