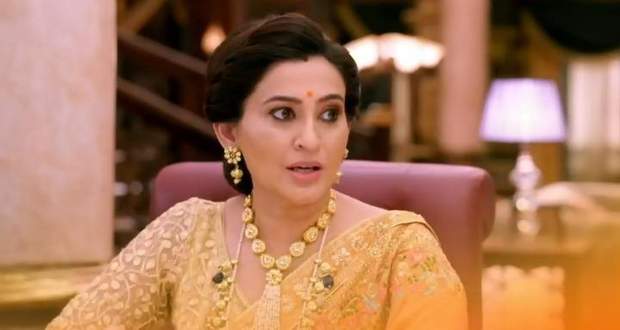 In the upcoming story of Bhagyalakshmi, Fate will defeat Neelam.

So far in the track of Bhagyalakshmi, Neelam asks Lakshmi and Rishi about Ayush’s location.

Neelam feels bad when Lakshmi tells her that Ayush is at Bajwa's house and feels betrayed when she gets to know that even Rishi knew it and he kept it a secret from his own mother.

As per the spoiler of the Bhagyalaxmi serial, feeling disappointed in Rishi for lying to her, Neelam walks away silently.

She thinks Lakshmi is slowly brainwashing her son.

At the same time, Rano arrives with Ayush at the Oberoi mansion and tells Neelam that Lakshmi’s fate has brought her here.

This statement frightens Neelam as she does want Lakshmi’s shadow near Rishi.

According to the Bhagyalakshmi twist, Neelam will announce that she will fight Lakshmi’s fate to keep her away from her son and family.

Let’s see what new tactics Neelam will use to separate Lakshmi from Rishi who is actually "Bhagya" Lakshmi in the future episodes of Bhagyalakshmi.

© Copyright tellybest.com, 2020, 2021. All Rights Reserved. Unauthorized use and/or duplication of any material from tellybest.com without written permission is strictly prohibited.
Cached Saved on: Sunday 2nd of October 2022 06:28:33 AMCached Disp on: Wednesday 5th of October 2022 04:42:00 PM