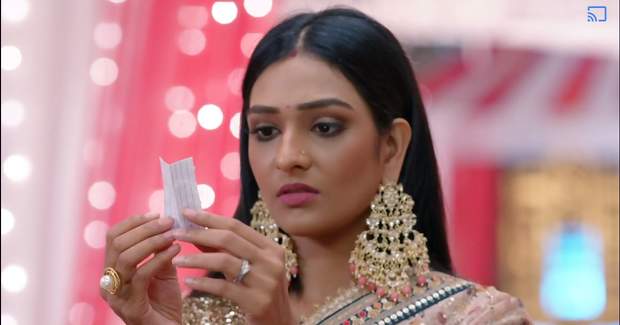 In the future Bhagyalaxmi serial episodes, Lakshmi will find a note on the floor and will pick it up.

Lakshmi will realize that she had seen the same note in Rishi's hand and will open it.

Up until now in the Bhagyalaxmi story, Rishi will write a note to Malishka admitting that he wants to marry her.

Rishi bumps into Lakshmi while the note gets into her hand.

Now as per the serial gossips of Bhagyalaxmi, Rishi will ask Malishka to marry him.

Malishka will tell him that she just finished with her Roka ceremony.

Further, Rishi will tell Malishka that he wrote a note to inform her that he is ready to marry her.

Malishka will ask Rishi about the note when he'll say that it has got misplaced.

Meanwhile, Lakshmi will find the note and will be opening it, according to the spoiler of Bhagyalaxmi.

Let us see whether Lakshmi reads the note, in the upcoming twists of the Bhagyalaxmi serial.

© Copyright tellybest.com, 2020, 2021. All Rights Reserved. Unauthorized use and/or duplication of any material from tellybest.com without written permission is strictly prohibited.
Cached Saved on: Thursday 20th of January 2022 12:18:55 PMCached Disp on: Friday 21st of January 2022 05:41:20 PM