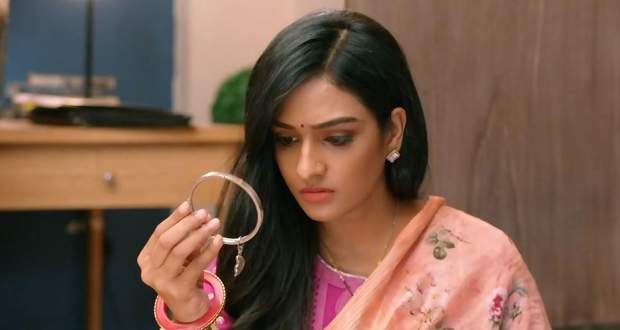 In the future Bhagyalaxmi serial episodes, Lakshmi will see the second half of the love band in her room.

Up until now in the Bhagyalaxmi story, Malishka is angry at Rishi. So, she tells Viraj that she is ready for the marriage.

On the other hand, Lakshmi tries to ask Rishi why is he upset after Malishka's marriage got fixed.

Now as per the serial gossips of Bhagyalaxmi, Viraj will ask Rishi whether Malishka has an affair with someone from his family.

Further, Lakshmi will explain to Rishi that everyone wishes to have a loyal life partner.

Suddenly, Lakshmi comes across the love band and will tell Rishi that he gave the love band to Malishka as he had only single half of it.

Lakshmi will ask Rishi that from where did this second half come in their room.

Meanwhile, Malishka will be crying while looking at the love band she has, according to the spoiler of Bhagyalaxmi.

Let us see what happens next, in the upcoming story of the Bhagyalaxmi serial.

© Copyright tellybest.com, 2020, 2021. All Rights Reserved. Unauthorized use and/or duplication of any material from tellybest.com without written permission is strictly prohibited.
Cached Saved on: Thursday 20th of January 2022 03:42:31 AM