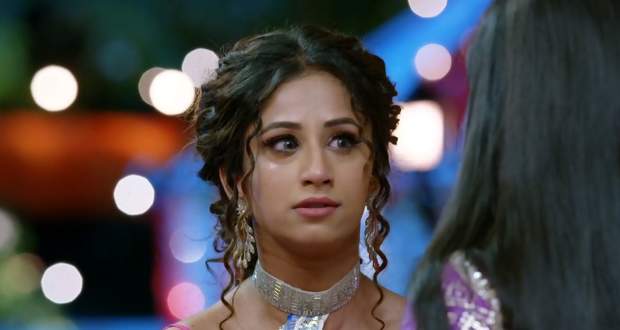 In the future Bhagyalaxmi serial episodes, Malishka will tell Lakshmi that she has always loved Rishi but Lakshmi came between them and stole him from Malishka.

Up until now in the Bhagyalaxmi story, Malishka is angry with Rishi as he has changed for Lakshmi. Malishka comes to Rishi's house with another guy to make Rishi jealous but ends up getting jealous of Lakshmi's pure love for Rishi.

Now as per the serial gossips of Bhagyalaxmi, Lakshmi will Malishka that Rishi is her husband and Malishka should not even think about loving him.

Further, some firecrackers will start bursting near Lakshmi and Malishka and they'll be in danger.

Rishi will see Malishka and run towards her but will stop when he sees that Lakshmi is also stuck between those crackers, according to the spoilers of Bhagyalaxmi.

Let us see whom will Rishi save, Lakshmi or Malishka, in the upcoming story of the Bhagyalaxmi serial.

© Copyright tellybest.com, 2020, 2021. All Rights Reserved. Unauthorized use and/or duplication of any material from tellybest.com without written permission is strictly prohibited.
Cached Saved on: Wednesday 19th of January 2022 01:19:57 PM