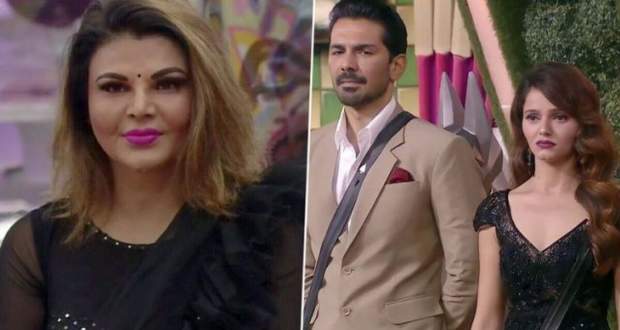 In the future episodes of Bigg Boss 14, Rakhi Sawant's actions towards Abhinav Shukla will provoke Rubina Dilaik to fight with her.

Further, Harsh Limbachiya, Raghav Juyal, Rashmi Desai and Tina Dutta entered the house and entertained the housemates and left after giving the bad news that Sonali Phogat has been eliminated.

Now as per the latest twists of Bigg Boss 14, Rakhi Sawant will write 'i love Abhinav'. Abhinav Shukla will question her about her to which she will reply that it is her crazy love for him.

However, Rubina will not be happy with this and will state that it is Rakhi's cheap drama and will tell Abhinav to not support her on the drama according to the future gossips of Bigg Boss 14.

Let's see if Rubina and Rakhi's fight escalates in the future episodes of Bigg Boss 14.