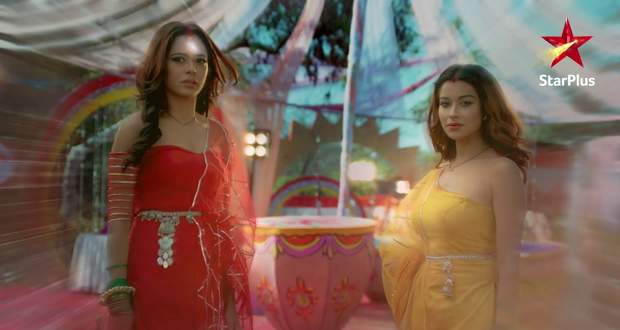 Drishti and Divya will soon defy death and will return to Shergill house in totally different avatars in the future Divya-Drishti episodes.

Up until now in Divya Drishti serial, Shikhar turned into a Daitya vanar to satiate his quench for powers. He ruthlessly attacked his family members which made Divya stab him to death.

On the other hand, Drishti caught hold of the magical flower which is the third clue to get the last gem activated. Pishachini is anxious to snatch it from Drishti.

According to the new spoilers of Divya Drishti serial, Divya and Drishti will trigger the bombs implanted in the building by Pishachini to stop her from gaining the powers of the last gem.

The twin sisters along with Pishachini will die in the bomb blast.

However, as per the new gossips of Divya Drishti serial, Drishti and Divya will return to their family on the 13th day of their death.

Both, Drishti and Divya’s new look will surprise their fans. Also, they will be blessed with new powers to face evil souls.

We are anxious to watch the upcoming story of DivyaDrishti serial, are you?

© Copyright tellybest.com, 2018 & 2019. All Rights Reserved. Unauthorized use and/or duplication of this material without written permission from tellybest.com is strictly prohibited.
Cached Saved on: Thursday 2nd of April 2020 05:12:59 AM