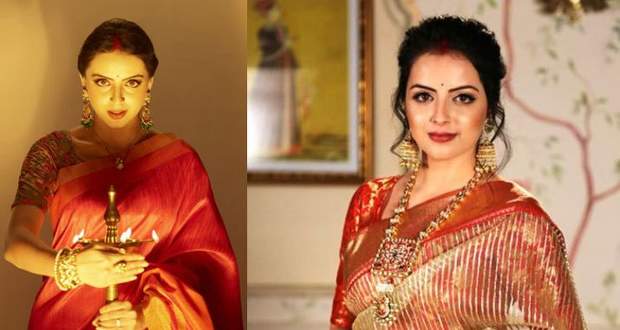 Ishaani aka Rani will fume in anger on learning about Pooja and Kabir’s wedding in the upcoming episodes of Ek Bhram serial.

So far in EBSS story, Kabir kidnapped Pooja’s mother in a shocking turn of events. He blackmailed Pooja to tie the wedding knot with him in return of her mother’s safety.

Pooja agreed to fulfill Kabir’s condition of getting hitched to him only for the sake of her mother’s life.

Based on the spoiler alerts of Sarvagun Sampanna serial, Rani will get angry at Pooja for surrendering before Kabir’s condition.

Rani, who loves Kabir but has only received rejection from him, will turn envious towards her sister. She will also confront Pooja for cheating her and marrying their enemy.

It will be interesting to watch how Rani will trouble Pooja in the forthcoming episodes of Ek Bharam serial.

© Copyright tellybest.com, 2022, 2023. All Rights Reserved. Unauthorized use and/or duplication of any material from tellybest.com without written permission is strictly prohibited.
Cached Saved on: Wednesday 25th of January 2023 12:33:14 PMCached Disp on: Monday 6th of February 2023 01:10:41 AM