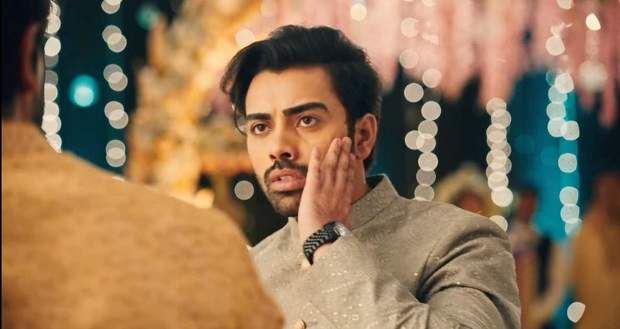 In the upcoming story of Imlie, Uday will be exposed by Imlie when Imli brings Uday's parents to his engagement ceremony.

Uday's parents expose how Uday is after money and is marrying Arpita for her money only and how he left his own parents after receiving their property.

Now as per the spoilers of the Imlie serial, Uday raises his hand to slap Imlie when she exposes the true colours of Uday in front of the family.

However, Aryan holds Uday's hand mid-air and in return gives such a hard slap on his face making him see stars in the bright daylight.

As per the upcoming twists of the serial, Imlie is very much impressed by Aryan's concern for her.

Let us see how Uday goes out of the life of Arpita and how Imlie brings Sundar into the limelight in the future episodes of the Imlie serial.

© Copyright tellybest.com, 2020, 2021. All Rights Reserved. Unauthorized use and/or duplication of any material from tellybest.com without written permission is strictly prohibited.
Cached Saved on: Saturday 1st of October 2022 10:41:41 PM