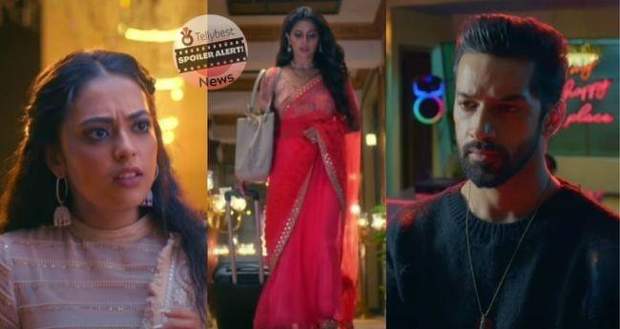 In the upcoming story of the Imlie serial, Imlie will slap Cheeni and leave the Rana house!

So far in the story of the Imlie serial, Atharva makes a special place in Imlie's heart and she is ready to accept him as her life partner.

However, Cheeni does love Atharva's money not him but he loves her unconditionally.

As per the spoiler of the Imlie serial, Atharva will forcefully marry Imlie as Cheeni will not tell the truth to her family.

Meanwhile, Atharva will gift a pendant to Cheeni as a promise of his forever love.

He assures Cheeni that he will divorce Imlie and marry her.

In the upcoming twist of the Imlie serial, Imlie will find out the truth when she discovers Cheeni's pendant in Atharva's drawer.

Later, Imlie will slap Cheeni accusing her of cheating with her husband.

Imlie will leave Atharva and walks out of the Rana house.

Let us see how Atharva handles this Chini and Imlie drama in the upcoming episodes of the Imlie serial.

© Copyright tellybest.com, 2022, 2023. All Rights Reserved. Unauthorized use and/or duplication of any material from tellybest.com without written permission is strictly prohibited.
Cached Saved on: Monday 21st of November 2022 07:35:59 AMCached Disp on: Friday 9th of December 2022 03:53:17 AM