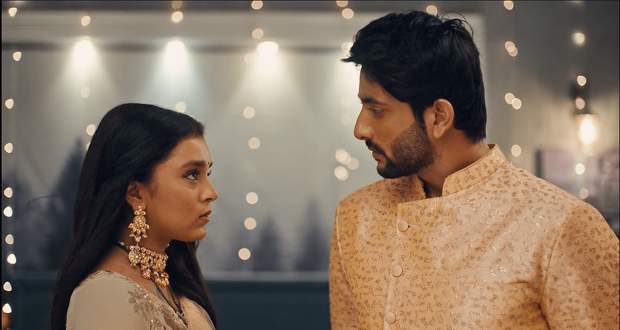 In the future story of the Imlie serial, Aryan will see Imlie in a beautiful golden saree and will get lost in her beauty.

Up until now in the lmlie story, Imlie tried to expose Uday’s true nature to the Rathore family but failed while Aryan warned her to not interfere again and announced that Uday and Arpita will get engaged the next day.

Now according to the gossip of the Imlie serial, Imlie will get ready in a gorgeous golden saree for the engagement while Aryan will see Imlie and will get hypnotized by her beauty.

Imlie will tell Aryan that she thinks Uday is a bad guy and Arpita shouldn't marry him while Aryan will reply that she will talk stupid things even after looking pretty.

Imlie will blush hearing the statement while Aryan will turn the other way and will feel stupid for saying it out loud.

In the future episodes, we will see Aryan refusing to admit to Imlie that he thinks that she's pretty and leaving from there feeling flustered.

Let's see if Aryan accepts his feelings for Imlie in the upcoming episodes of the Imli serial.

© Copyright tellybest.com, 2020, 2021. All Rights Reserved. Unauthorized use and/or duplication of any material from tellybest.com without written permission is strictly prohibited.
Cached Saved on: Sunday 2nd of October 2022 05:31:26 AM