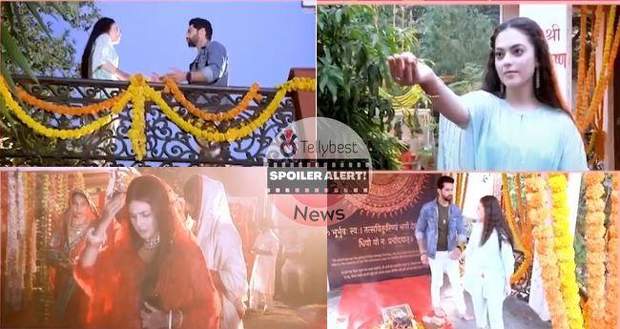 In the upcoming story of the Imlie serial, Atharva will marry Cheeni but will add Sindoor to Imlie's hairline!

So far in the story of the Imlie serial, Imlie keeps karva chauth fast for Atharva while he confesses his love to Cheeni in the temple.

As per the latest spoiler, Cheeni will demand Atharva to marry her to prove his love to her.

They will take seven pheras in the temple and she will demand Atharva to fill her hairline with sindoor.

Meanwhile, the sindoor box will stumble from Atharva's hands and fall on Imlie's head who is sitting on the bench downstairs.

What will Atharva do now? Who will become Atharva's wife because he took pheras with Cheeni but filled the sindoor in Imlie's hairline?

Let's see the drama of Atharva, Cheeni and Imlie's accidental marriage unfold in the upcoming episodes of the Imlie serial.

© Copyright tellybest.com, 2022, 2023. All Rights Reserved. Unauthorized use and/or duplication of any material from tellybest.com without written permission is strictly prohibited.
Cached Saved on: Monday 21st of November 2022 09:31:12 PMCached Disp on: Thursday 1st of December 2022 01:09:08 AM