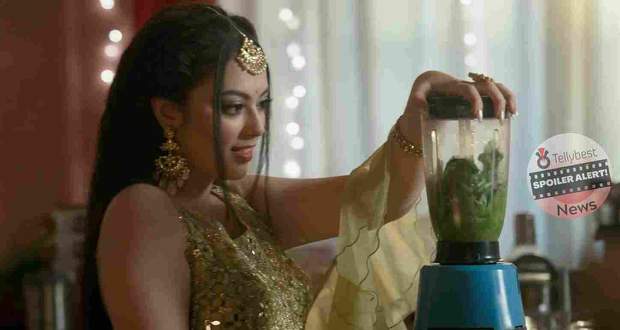 In the upcoming story of the Imlie serial, Cheeni will replace Imlie’s mehndi with spinach paste!

So far in the story of the Imlie serial, Imlie urges to dance with Atharva as she has accepted him as her life partner.

Meanwhile, Cheeni thinks that everyone is against her and only loves Imlie so she decides to take up Anu’s evil advice.

Later, Cheeni goes to the kitchen and gets an idea after seeing the spinach leaves.

As per the spoiler of the Imlie serial, Cheeni will replace Imlie mehndi's bowl with spinach paste as she doesn't want Imlie to put on mehndi of Atharva’s name.

Cheeni thinks only she deserves her name on Atharva’s mehndi and his wealth.

In the upcoming twist of the Imlie serial, Atharva will put mehndi on Imlie’s hand accidentally.

Let us see if Atharva will tell truth to Imlie or if Akash and Kia will stop him and maintain their dignity in front of Rudra in the upcoming episodes of the Imlie serial.

© Copyright tellybest.com, 2022, 2023. All Rights Reserved. Unauthorized use and/or duplication of any material from tellybest.com without written permission is strictly prohibited.
Cached Saved on: Monday 21st of November 2022 08:47:56 PMCached Disp on: Tuesday 29th of November 2022 12:09:47 AM