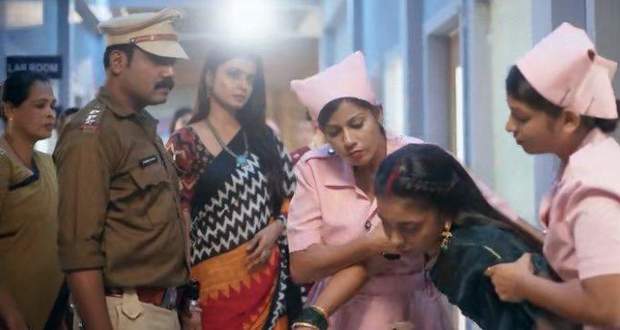 In the upcoming story of Imlie, Malini would call police officers to arrest Imlie.

So far in the serial Imlie, Malini has disclosed her real intentions to Imlie about little Gudiya and told her that she’ll use this child to ruin Imlie’s life.

In the latest episode of Imlie, Malini calls an ambulance to take little Gudiya to the hospital but she starts arguing with the hospital nurse.

When Imlie sees that Malini is distracted, she uses this opportunity to take away the baby from the ambulance without Malini noticing.

As per the latest spoiler of the series, when Malini finds out about this, she calls the police to arrest Imlie, who has taken little Gudiya to be treated in the hospital.

Imlie tries to defend herself by saying that Malini is not a responsible mother, but when this doesn’t work, she pretends to faint in front of the officers so that they do not arrest her.

Let us continue to watch the future episodes of Imlie to find out if Imlie would be able to save little Gudiya from Malini’s evil plans.

© Copyright tellybest.com, 2022, 2023. All Rights Reserved. Unauthorized use and/or duplication of any material from tellybest.com without written permission is strictly prohibited.
Cached Saved on: Wednesday 25th of January 2023 09:29:55 AMCached Disp on: Sunday 5th of February 2023 12:14:02 PM