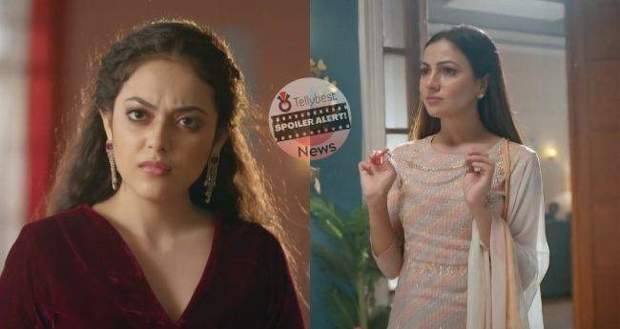 In the upcoming story of the Imlie serial, Rupi threatens Cheeni and will become Hitler Bua!

So far in the story of the Imlie serial, Rudra's decision to marry Atharva to Imlie in a week while Rupi finds Cheeni a marriage proposal when she finds a necklace gifted by Atharva in Cheeni's bedroom.

Later, Rupi requests Cheeni to meet Jatin (Potential Groom) and then decide whether she likes him or not.

As per the spoiler of the Imlie serial, Rupi threatens Cheeni to leave Atharva and Imlie's relationship alone.

Else she will become Hitler Bua and take an extreme step against her.

In the upcoming twist of the Imlie serial, Rupi will try to get Cheeni married forcefully.

Let us see if Cheeni is able to save herself from Rupi's plan or if Atharva will confess his love to Cheeni and break his engagement with Imlie in the new episodes of the Imlie serial.

© Copyright tellybest.com, 2022, 2023. All Rights Reserved. Unauthorized use and/or duplication of any material from tellybest.com without written permission is strictly prohibited.
Cached Saved on: Monday 21st of November 2022 12:50:23 AMCached Disp on: Wednesday 7th of December 2022 12:02:32 PM