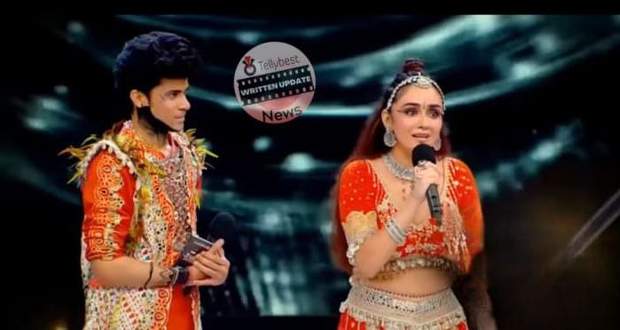 The competition has fired up after the wildcard entries of Sriti Jha, Ada Malik and Nishant Bhatt.

In the latest promo of Jhalak Dikhla Ja 10 (16 October 2022), Sriti Jha performs the song "Laal Ishq" in Bollywood and increases the competition level while completing her fan’s demand.

In another recent promo of Jhalak Dikhla Ja Season 10 (16-10-2022), Amruta stuns Madhuri Dixit with her dance on the iconic song “Choli Ke Piche” and earns the first Rs 101 from her.

Later, Faisal performs the song “Janam Janam” with his skipper Vaishnavi and does contemporary style and lots of tricks.

After the performance, Karan compares him with Shahrukh Khan.

Faisal gets a perfect score and a golden stamp on his JDJ passport.

Afterwards, Gunjan performs with Tejas on the song “Marathi Murgi” and does hip hop and stuns everyone with her flexibility.

As expected, the judges give a standing ovation and give Gunjan a perfect score and a golden stamp.

Later, Rubina performs with his skipper Karan and dances to the song “Mashallah” and does belly dances and uses sand and Arabic setting to her advantage.

After the performance, Nora recalls her dance performance on the same song and praises her balance.

Rubina gets a perfect score and a golden stamp on her JDJ stamp.

Afterwards, Nishant Bhatt performs with his skipper Anuradha on the song “Sapne Mere” and does an emotional act while doing contemporary dance form and using a transparent mirror as a prop.

Meanwhile, Madhu gets emotional and gives a standing ovation.

Nishant gets a golden stamp and a perfect score.

Afterwards, Niti Taylor performs with her skipper Akash on the song “Ah Zara”  using Egypt setting as a prop while performing freestyle and tutting dance style.

Later, Niti gets a perfect score and gets a golden stamp.

After some time, Ada Malika performs with her skipper Shyam on the song “Drama Queen” using tables and chairs as props and does freestyle.

Meanwhile, Nora Fatehi advises her to improve her dance skills.

Later, Parineeti dances to her song “Drama Queen” with Nora and Madhuri.

Afterwards, Karan announces Paras and Shilpa as the bottom two contestants and Shilpa gets eliminated.

© Copyright tellybest.com, 2022, 2023. All Rights Reserved. Unauthorized use and/or duplication of any material from tellybest.com without written permission is strictly prohibited.
Cached Saved on: Monday 21st of November 2022 08:31:58 AMCached Disp on: Thursday 1st of December 2022 11:55:11 AM