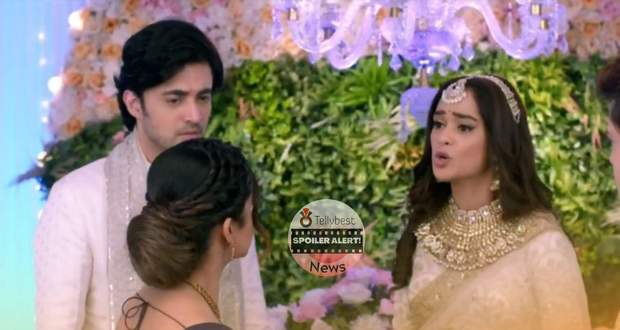 In the upcoming story of Kumkum Bhagya, Prachi will land a tight slap on Rhea's face in front of the entire family.

The current track of Kumkum Bhagya revolves around Prachi and Siddharth's engagement. Prachi and Sid have joined hands to expose Rhea and Alia's plan and save Mihika from their capture.

According to the latest twists of Kumkum Bhagya, Prachi will reveal Rhea's true face in front of Ranbir and everyone along with Sid.

Prachi will slap Rhea hard on her face and announce how she forced Sid to lie to everyone in the family that Ranbir's child belongs to him.

Rhea will be stunned to react to Prachi's attack and panic internally as to how to defend herself.

Hearing Prachi's claim, Ranbir will ask Rhea if Prachi's words are true to which Rhea strongly denies the accusation and instead blames Prachi.

The main question lies, do Sid and Prachi have evidence to prove themselves innocent and present the true culprits?

Let us see how Sid and Prachi reveal the whole truth to the entire family in the upcoming episodes of Kumkum Bhagya.

© Copyright tellybest.com, 2022, 2023. All Rights Reserved. Unauthorized use and/or duplication of any material from tellybest.com without written permission is strictly prohibited.
Cached Saved on: Monday 21st of November 2022 07:55:18 AMCached Disp on: Thursday 1st of December 2022 11:55:57 AM