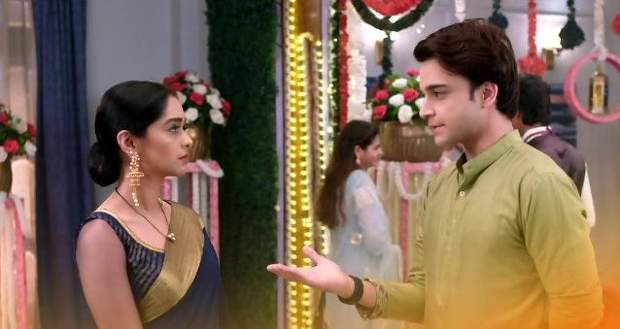 In the upcoming story of Kumkum Bhagya, there will be a hint of sweetness in Ranbir and Prachi’s currently hateful relationship.

The current track of Kumkum Bhagya revolves around Pallavi accepting Prachi as her daughter-in-law and showering love on her.

However, Pallavi has a hidden motive to separate Prachi from her child after he/she is born.

As per the latest twists of Kumkum Bhagya, Ranbir tries to come closer to Prachi during a celebration of something special in the house.

Prachi still has not forgiven Ranbir for making Rhea pregnant and acts bitter toward Ranbir.

Ranbir is determined to win back Prachi’s trust and tells her that even when she does not ask him for help, he will always be there to support her.

Hearing those words, Prachi acts indifferent outside but eventually feels happy inside her heart.

As Ranbir extends his hands to Prachi, she gets enticed at the moment, forgetting about their misunderstandings.

Let us see how the happiness of becoming parents changes the dynamic of PranBir in the upcoming episodes of Kumkum Bhagya.

© Copyright tellybest.com, 2022, 2023. All Rights Reserved. Unauthorized use and/or duplication of any material from tellybest.com without written permission is strictly prohibited.
Cached Saved on: Wednesday 25th of January 2023 01:53:24 PMCached Disp on: Thursday 9th of February 2023 08:16:16 AM