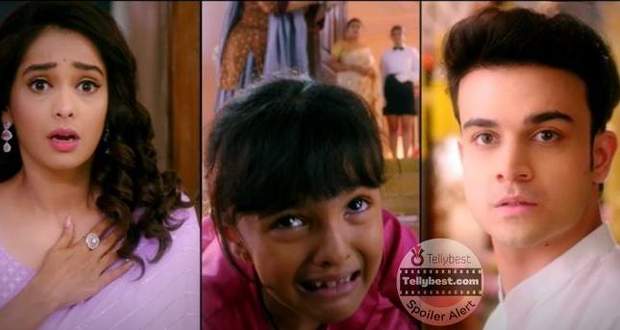 In the upcoming story of Kumkum Bhagya, Prachi and Ranbir’s daughter, Khushi, will be seen as a homeless child.

The current track of Kumkum revolves around Alia dropping Prachi and Ranbir’s daughter into the river after which Prachi also falls into that river.

A leap of 6 years takes place after which both Ranbir and Prachi are shown to have one daughter each, but with different partners.

According to the latest twists of Kumkum Bhagya, Prachi and Ranbir’s daughter, Panchi is now “Khushi” and lives as an orphan.

The new promo of Kumkum Bhagya shows Khushi sitting at a puja in a temple, but a woman throws her out of there.

The woman says that Khushi does not have any parents or family address as she looks at the child with disgusted eyes.

Khushi is seen to be groveling in pain as she cries after being thrown out of the temple and wonders where her real parents are.

Both Ranbir and Prachi are unaware that their “Panchi” is still alive and is struggling to survive in this harsh world by herself.

Let us see if Prachi and Ranbir gets to meet their daughter after 6 years in the upcoming episodes of Kumkum Bhagya.