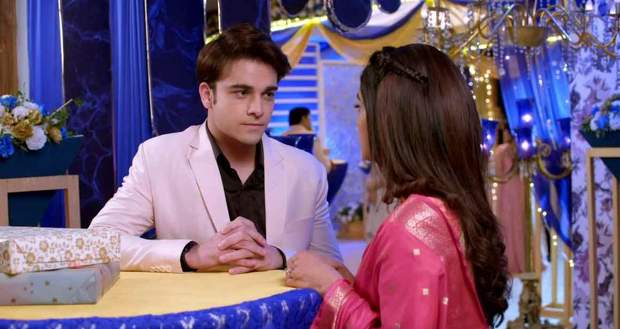 In the upcoming story of Kumkum Bhagya, Ranbir will stand beside Prachi with his support for Prachi and their baby.

The current track of Kumkum Bhagya revolves around the revelation of Prachi’s pregnancy to the family members after she faints at the party.

Rhea is stunned at the revelation as Prachi will get her spot in the family if everyone gets to know that Rhea is lying about her pregnancy.

As per the latest twists of Kumkum Bhagya, Prachi will voluntarily decide to leave the house after Rhea will cause a scene in front of everyone.

Pallavi asks Ranbeer to abort Prachi's child as the child does not belong to him.

However, Ranbir will stop Prachi from leaving and announce that he will stand beside Prachi through her pregnancy and will take the responsibility of being a father.

Ranbir will say that he only wants to be a father along with Prachi and not Rhea.

Let us see how Rhea and Pallavi respond to Ranbir’s brave announcement in the upcoming episodes of Kumkum Bhagya.

© Copyright tellybest.com, 2022, 2023. All Rights Reserved. Unauthorized use and/or duplication of any material from tellybest.com without written permission is strictly prohibited.
Cached Saved on: Wednesday 25th of January 2023 07:14:01 PMCached Disp on: Sunday 5th of February 2023 12:30:46 PM