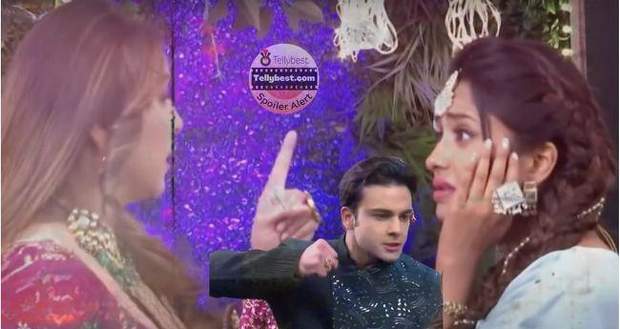 In the upcoming story of Kumkum Bhagya, Pallavi will land a thrashing slap on Rhea's face after her truth gets revealed by Ranbir.

The current track of Kumkum Bhagya revolves around Ranbir discovering the truth of Mihika's kidnapping from Sid and getting shocked after learning that Alia and Rhea are behind everything.

Sid reveals everything to Ranbir about how he is getting blackmailed by Alia and Rhea to marry Prachi or else they will harm Mihika.

According to the latest twists of Kumkum Bhagya, Ranbir will reveal Rhea's truth in front of everyone.

Ranbir will announce that Rhea and Alia have kidnapped Mihika and are blackmailing Sid to marry Prachi.

As Rhea tries to convince Ranbir that Sid and Prachi are liars, Ranbir will call Rhea the biggest curse of his life and almost raises his hand at her in anger.

Rhea comes to Pallavi for help and support but Pallavi slaps her on her face and denies supporting her in her lies.

Without Alia present, Rhea struggles to defend herself and says that Prachi is raising a sin in her womb which boils Ranbir's blood with anger.

Let us see how Ranbir and Pallavi deal with Rhea in the upcoming episodes of Kumkum Bhagya.