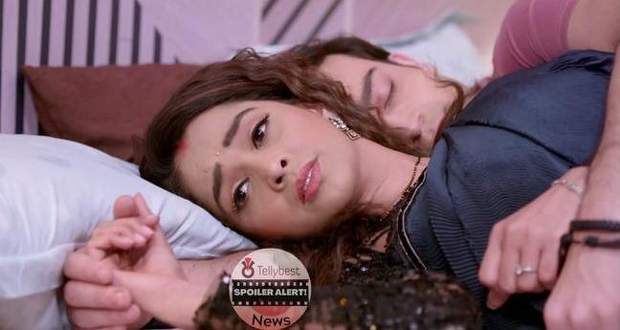 The current track of Kumkum Bhagya shows Prachi asking Rhea to get the DNA test done to prove if her baby is of Ranbir or not.

Prachi further insinuates that she feels that Rhea isn't carrying Ranbir's kid at all. Alia retorts by saying that Rhea won't do the test to which Prachi responds that she won't get married to Sid unless Rhea takes the test.

In the upcoming twists of the serial, Ranbeer starts coming closer to Prachi as he now believes that nobody else apart from her could be the mother of his child.

Prachi falls into Ranbeer's arms while he sleeps and they embrace. Prachi at that time starts crying as she finally feels at peace in the midst of the storm brewing in the house.

Prachi gets nostalgic about her and Ranbeer's blissful married life before everything was destroyed in their lives, which results in tears rolling down her face.

Meanwhile, Rhea and Alia, have come up with a plan to get Rhea's fake DNA report.

Let us watch the future episodes of Kumkum Bhagya if Rhea and Alia succeed or if will they fail and reunite Prachi and Ranbeer.

© Copyright tellybest.com, 2022, 2023. All Rights Reserved. Unauthorized use and/or duplication of any material from tellybest.com without written permission is strictly prohibited.
Cached Saved on: Monday 21st of November 2022 05:42:13 AMCached Disp on: Saturday 10th of December 2022 03:26:04 PM