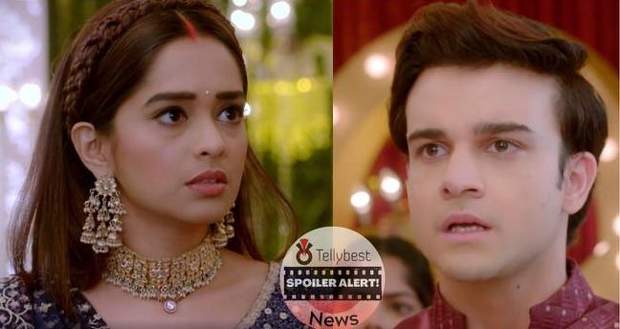 In the upcoming story of Kumkum Bhagya, Ranbir and Prachi will reunite after what seems like forever.

The current track of Kumkum Bhagya shows that Rhea gave her blood for the report finding no option and later returns home with a worried face.

Alia says no harm will come to Rhea as long as she is there and they will keep her pregnancy a secret.

In the upcoming twist, the Kohlis have geared up for Prachi and Sid's sangeet, but Prachi is in despair as she doesn't know how she will ever get back with Ranbir once she is forcefully married off.

At the sangeet Ranbir creates a ruckus by asking Prachi, why is she ready to get married to Sid even though she loves him.

Prachi bites her tongue as she knows the dire repercussions that await Mihika if the truth comes out, and when Ranbir doesn't get an answer he walks away.

Prachi calls out to him and announces to the whole family that she loves Ranbir and will not marry Sid, which leaves everyone shocked.

Ranbir upon hearing this runs towards Prachi and they finally embrace one another.

Let us watch the future episodes of Kumkum Bhagya to know what future awaits Mihika and Sid after this reunion of PranBir.

© Copyright tellybest.com, 2022, 2023. All Rights Reserved. Unauthorized use and/or duplication of any material from tellybest.com without written permission is strictly prohibited.
Cached Saved on: Monday 21st of November 2022 01:01:03 AMCached Disp on: Friday 9th of December 2022 05:45:29 AM