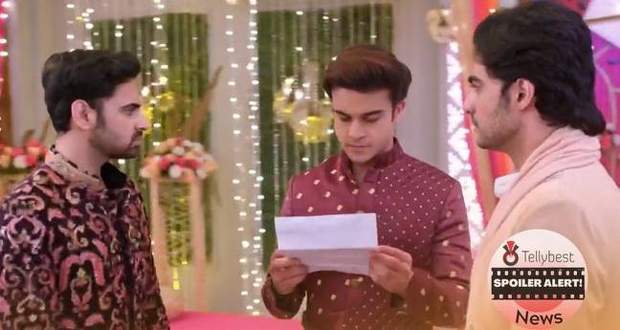 In the upcoming story of Kumkum Bhagya, Rhea's fate in the Kohli House rests in Ranbeer's hands.

The current track of Kumkum Bhagya shows that on the one hand Sid, Shahana, and Prachi are keeping an eye out to receive the report before Rhea.

While on the other hand, the tables have turned on Alia who is now being threatened by her own goon.

In the upcoming twist, the Kohli House is filled with romance and mystery.

When on one hand, Ranbeer combines Prachi and his name and writes on her hand with Mehendi 'Pranbeer' which melts Prachi's heart.

However, when the report turns up it is obtained by Aryan and Sid prior to Rhea.

When Aryan takes a closer look to see the reports which mention that DNA does not match, Ranbeer takes the report from Aryan.

Is Rhea going to be finally thrown out of the Kohli House or is this all too good to be true?

Let us watch the future episodes of Kumkum Bhagya to know what future awaits Rhea, Ranbeer and Prachi.

When Aryaan takes a closer look to see the reports which mention that DNA does not match, Ranbeer takes the report from Aryaan.

© Copyright tellybest.com, 2022, 2023. All Rights Reserved. Unauthorized use and/or duplication of any material from tellybest.com without written permission is strictly prohibited.
Cached Saved on: Monday 21st of November 2022 02:12:23 AMCached Disp on: Monday 5th of December 2022 12:59:23 AM