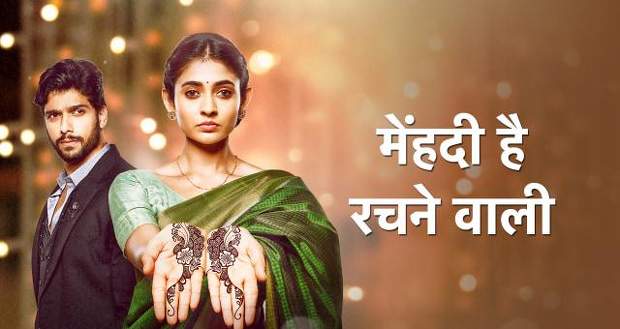 Star Plus’s latest offering, Mehendi Hai Rachne Waali - MHRW is the story of two souls who have nothing in common but still, destiny brings them together.

MHRW serial is a remake of a Telegu series, Gorintaku, and offers a blend of drama but a common story.

Mehendi Hai Rachne Wali is the story of a girl named Pallavi who lost her husband at a very young age but refuses to live her life like a widow.

The male lead Raghav of MHRW is a bitter person from the outside but is sensitive from the inside. He has been cheated in love in the past and refuses to be with any girl.

The serial starts with Pallavi taking care of a saree shop and also she lives with her in-laws. She never wants to get married again because of her bitter past.

Raghav misunderstands Pallavi and later burns all her hard work. Meanwhile, Pallavi gets shattered as she is already tortured by her aunt-in-law Sulochana.

Further, Raghav and Pallavi continue to cross paths while Anjali tries to take revenge on Raghav.

Raghav lives two lives. He is a mafia don for the world while he secretly brings food for the elderly as Rama Swami.

Raghav wants his mother and sister to stay with him and promises to stay out of the limelight. However, Anjali takes her revenge and virals his pictures in bed.

Raghav further misunderstands the situation and thinks Pallavi is behind it.

Shivangi Khedkar is playing the role of a widow named Pallavi who takes care of her in-law's family and a saree shop altogether.

She is a strong and fearless woman who never wants to get married again. She is caring and passionate about the people she loves.

She also helps the needy and gives food to poor people. She also gives blood to Raghav’s mother when she is in need.

Sai Ketan Rao is playing the role of a Mafia businessman Raghav in the serial who is arrogant and rude to people.

However, he has a different side and works at an elderly home by the name of Rama Swami.

He is bitter from the outside but has a kind heart. He continues to cross paths with Pallavi and misunderstands her while she continues to help him.

Mehendi Hai Rachne Wali (MHRW) is an old concept of hate relationship turning into love. As Pallavi and Raghav are poles apart, their destiny brings them together.

Sai Ketan Rao as Raghav is brilliant as he is a perfect mix of arrogance and sweetness.

The character of Pallavi is also perfectly crafted as an independent lady who doesn’t wish to follow the age-old customs a widow needs to.

Pallavi and Raghav’s chemistry is one thing the serial is best in. However, the story is a little slow and lacks any sort of uniqueness.

© Copyright tellybest.com, 2020, 2021. All Rights Reserved. Unauthorized use and/or duplication of any material from tellybest.com without written permission is strictly prohibited.
Cached Saved on: Sunday 2nd of October 2022 06:45:57 AMCached Disp on: Thursday 6th of October 2022 05:11:52 PM