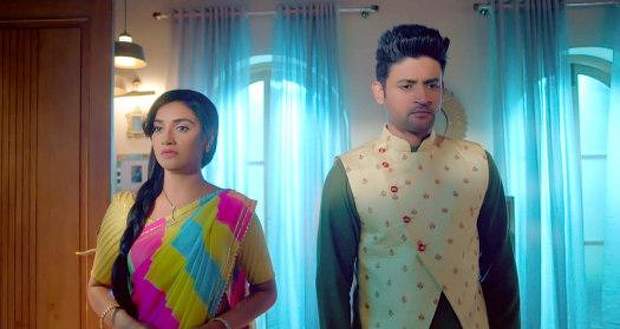 Up until now in Shaadi Mubarak story, Preeti fell unconscious while she and Purti were having street food. Purti takes her to the hospital but K.T. misunderstands Purti as he thinks she has kidnapped Preeti.

Meanwhile, Preeti regained her consciousness. Preeti gets worried as she thinks Purti might have come to know that she has cancer to which the doctor replies she hasn’t told Purti anything.

Purti comes to know from her neighbor that police have come outside her house she gets worried and feels that Preeti and K.T. are deceiving her.

Now as per the latest twist of Shaadi Mubarak, Purti will get drunk and will accidently reveal to K.T. that she is going to the surrogate for his and Preeti's child which will shock her.

Further, she will fall unconscious according to the gossip alert of Shaadi Mubarak story.

Let’s see how K.T. reacts to this news in the future story of Shaadi Mubarak.

© Copyright tellybest.com, 2020, 2021. All Rights Reserved. Unauthorized use and/or duplication of any material from tellybest.com without written permission is strictly prohibited.
Cached Saved on: Monday 19th of April 2021 12:10:02 PM