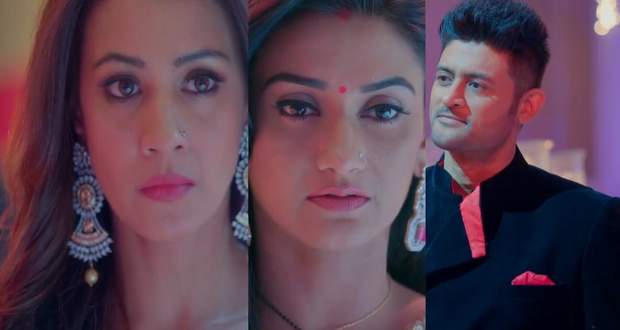 In the upcoming episodes of the Shaadi Mubarak serial, Nandani will form a plan after which she will tell K.T and Preeti that they are standing under the mistletoe and will tell them to kiss.

Up until now in Shaadi Mubarak's story, Nandani put her cunning plan in action and locked Preeti in a room. Later, she dressed in her gown and went dancing with K.T.

However, Preeti managed to get K.T's attention and convinced him to not ruin the party by lashing out at Nandani.

Now as per the serial gossips of Shaadi Mubarak, K.T will give a grand speech dedicating to Preeti which will make Nandani jealous.

She will further plan something and will tell K.T and Preeti that they are responsible for the mistake and that they have to kiss each other according to the future twists of Shaadi Mubarak.

Being put in an uncomfortable situation by Nandani, let's how will they get out it in the upcoming story of Shadi Mubarak serial.

© Copyright tellybest.com, 2020, 2021. All Rights Reserved. Unauthorized use and/or duplication of any material from tellybest.com without written permission is strictly prohibited.
Cached Saved on: Friday 30th of July 2021 12:57:57 PM