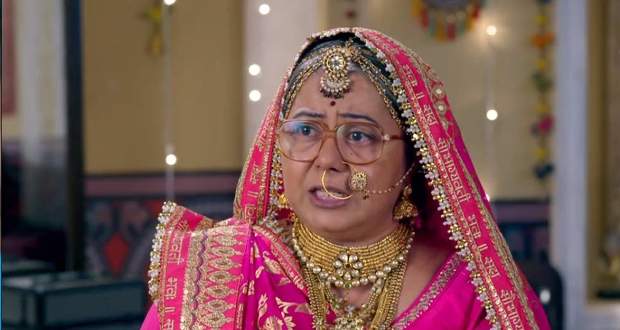 In the forthcoming episodes of Star Plus’s Shaadi Mubarak serial, Bua Daadi will ask K.T and Preeti to get married.

Up until now in Shadi Mubarak story, Rati’s plan was successful to get Preeti questioned about her relationship with K.T.

Further, Preeti felt betrayed when K.T didn’t tell her the truth about his married life and so she decided to dissolve her business partnership with him.

Now as per the serial gossip of Shaadi Mubarak, Kusum will take a stand for Preeti in front of Bua Daadi and will ask her to believe Preeti.

Meanwhile, Bua Daadi will come up with a plan so that Preeti doesn’t have to face humiliation in society.

She will ask Preeti to get married to K.T and will ask K.T to put Sindoor on Preeti’s hairline according to the recent serial twist of Shaadi-Mubarak serial.

Let’s see if Preeti will marry K.T in the future story of Shaadi Mubarak serial.

© Copyright tellybest.com, 2020, 2021. All Rights Reserved. Unauthorized use and/or duplication of any material from tellybest.com without written permission is strictly prohibited.
Cached Saved on: Sunday 9th of May 2021 10:07:17 PM