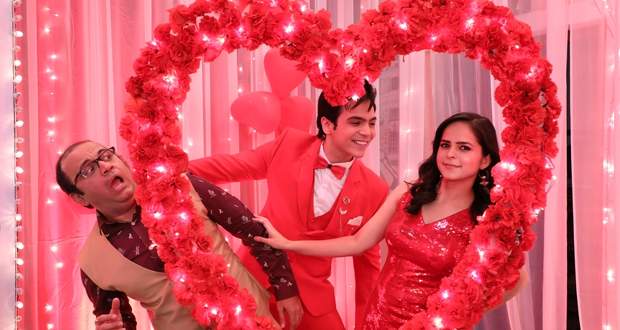 Bhide will get mad at Tapu for proposing his daughter and will crush the rose given by him in the upcoming episodes of Taarak Mehta Ka Ooltah Chashmah.

So far in TMKOC story, Tapu Sena asked for permission from Bhide to use the clubhouse for a special function on Valentine’s Day. Bhide has given the permission and is scared of Tapu proposing to Sonu.

Now as per the gossip updates of Taarak Mehta Ka Ulta Chashmah serial, Tapu will go down on one knee and will reveal that he loves Sonu in front of the whole Gokuldham society.

Bhide will reach on the stage and will get furious with Tapu. He will even crush the roses he gives to Sonu according to the spoiler twists of Taarak Mehta Ka Ultah Chashmah serial.

© Copyright tellybest.com, 2018 & 2019. All Rights Reserved. Unauthorized use and/or duplication of this material without written permission from tellybest.com is strictly prohibited.
Cached Saved on: Saturday 4th of April 2020 04:09:14 AM