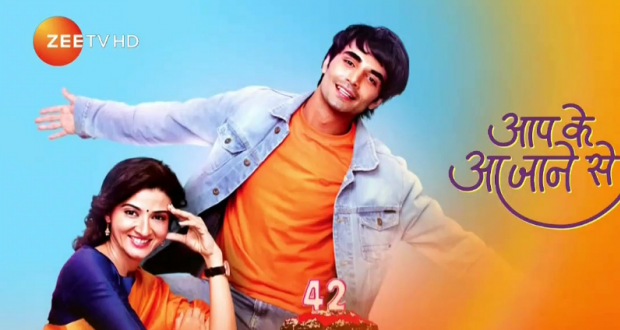 Puneesh explains his plan to Bhoomi.

Before the firecracker burns, Bhoomi rushes and throws it away. She hurts her leg. Ved asks Sahil to let her stay for the night. Maa taunts Bhoomi. Bhoomi blames Vedika for stealing Sahil and not taking care of Ved.

Vedika asks Bhoomi how she knew about the bomb. She deflects the question.

Their neighbors come and mock them. They ask Sahil to explain his relationship with Vedika. Situation escalates; a woman grabs Vedika’s mangalsutra. She defends their relationship. She blames the mindset of people and asks them to speak out against domestic abuse.

Sahil says that he and Bhoomi are getting a divorce. He will marry Vedika.

At the police station, Sahil and Vedika romance each other. Sahil feeds Vedika.

Next day, maa and Arya visit them at the police station. Unknown to them, Puneesh pays for their bail. He plans to kill Vedika by running her over with a car. The episode ends.

Aapkeaajanese Precap: Bhoomi calls Ved to tell him to come over for Diwali gifts. In the next scene, Sahil and Bhoomi discuss their divorce in front of other family members.

© Copyright tellybest.com, 2020, 2021. All Rights Reserved. Unauthorized use and/or duplication of any material from tellybest.com without written permission is strictly prohibited.
Cached Saved on: Monday 29th of November 2021 07:20:43 PMCached Disp on: Wednesday 1st of December 2021 03:34:00 PM