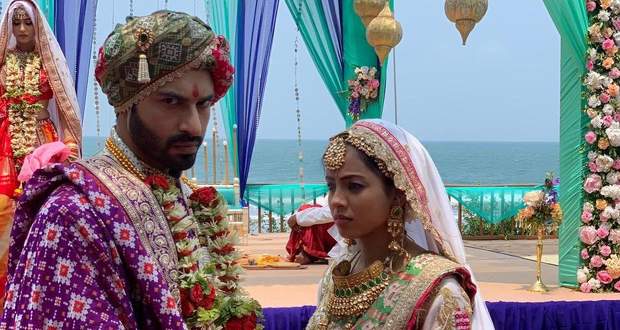 Today's Aapki Nazron Ne Samjha 26 April 2021 episode starts with Rajvee getting shocked as she sees Shamika in place of Nandini.

Shamika defends herself by saying that she wants to marry Darsh as she still loves him.

Rajvee gets angry with Namrata as she tries to hurt Darsh by getting him married to Shamika.

Namrata reveals that she took permission from Vipul and other elders to execute her plan.

As she thought Nandini is a gold digger and would run away stealing the jewelry without thinking about Rawal’s reputation.

Rajvee gets furious with Namrata for planning a cunning ploy against Nandini and hurting Darsh.

Darsh tells Namrata that he and Nandini love each other the most and Shamika is lying that she loves him as in the past she had hurt him a lot.

Later, Nandini tells everyone that she got kidnapped and that’s why she failed to reach the wedding venue on time.

Rajvee supports Nandini as she tries to prove her innocence and questions Vipul for remaining silent instead of supporting Nandini.