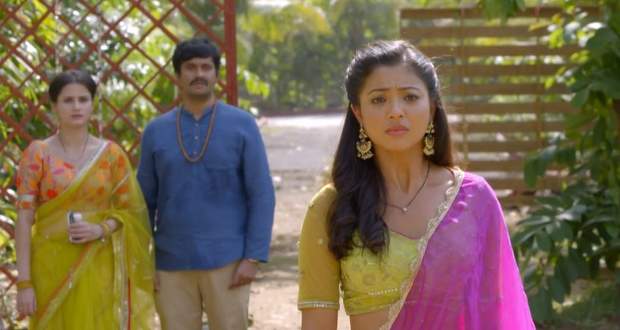 Today's Aapki Nazron Ne Samjha (ANNS) 26 May 2021 episode starts with Shobit informing Rajvi about the interview while she tells him and Gunjan to do it.

Meanwhile, Darsh gifts a sweet manufacturing machine to Nandini and she tells the delivery man to leave it there.

Rajvi sees Shobit tirelessly working and gets emotional telling him that he has grown up.

Bansuri informs Nandini that she got the money by giving the house papers to Darsh and Nandini says that she will pay that money.

Rajvi cries and gets emotional for making Shobit sacrifice while he sweet-talks her and consoles her.

Later, Shobit is about to give the live interview but Darsh comes there without Nandini and everyone makes Darsh do the interview.

The interviewer asks Darsh why Nandini left him while Nandini arrives there and says that she is with him.

Later, Nandini reveals that she is there just to take back the house documents from Darsh.

He says that he doesn't have it while Chetan gets the papers from Darsh's bag and confirms Nandini's statement.

Nandini tells them that she can't give him the house but will pay him for the marriage.

However, Darsh calculates the money and offers her to become his secretary at Rawal sweets and pay off the marriage expanse in one year.