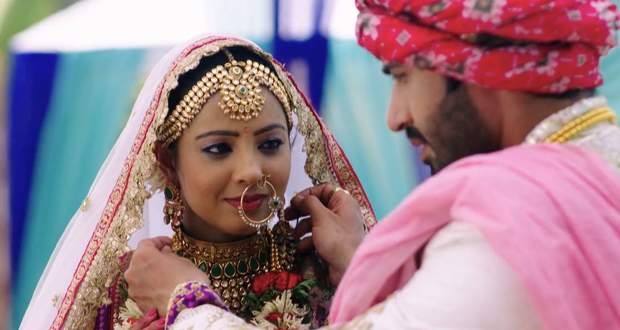 Today's Aapki Nazron Ne Samjha 28 April 2021 episode starts with Nandini getting happy as she gets married to Darsh.

Meanwhile, Rajvee asks Bansuri to begin with both the bride's farewell rituals.

Later, Naveen and Bansuri get emotional as they bid goodbye to Nandini and Gunjan.

Darsh tells his Uncle that he wants to plan something extra-ordinary for Nandini so that it helps her overcome her farewell pain.

Raklaa plans a cunning ploy against Nandini by locking Charmi into a room and inflaming Charmi indirectly by saying that it is Nandini who forcefully tried to get Shobhit married to Gunjan.

Charmi gets furious and misunderstands Nandini. Further, she tells Darsh about this.

Rajvee welcomes both her daughters-in-law with a warm heart and plans playful rituals for them.

But, Darsh's peculiar behavior stuns Nandini as he behaves rudely with her.

Nandini gets confused as she thinks maybe Darsh had an argument with Namrata and so he is behaving strangely.

© Copyright tellybest.com, 2020, 2021. All Rights Reserved. Unauthorized use and/or duplication of any material from tellybest.com without written permission is strictly prohibited.
Cached Saved on: Monday 17th of January 2022 09:14:25 PM