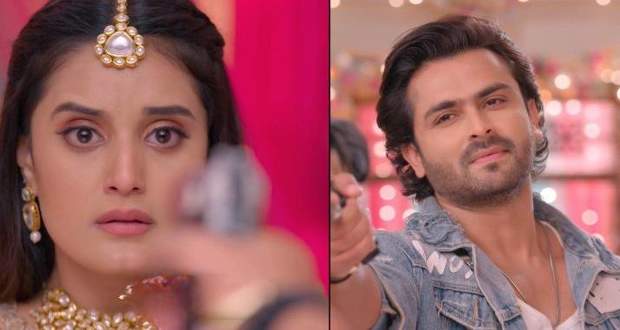 Subash, Ajooni’s father, asks him to leave their house since they are a respectable family.

However, Rajveer only smiles, twirling the gun in his hand, and says he is respectable too.

Ajooni’s brother, Bharat, loses his control and charges at Rajveer to beat him but a group of men holds him back before physical violence occurs.

With a smirk on his face, Rajveer tells Bharat to keep calm since he is going to be his brother-in-law.

The next turn to scold Rajveer is of Ajooni’s Dadi who says she is not scared of guns and violence since she has seen it all.

However, when Rajveer takes out his knife to tease her, she steps back and he laughs, dropping the knife on the floor.

Ajooni watches Rajveer create havoc in her house with anger pumping in her veins while Subash goes down and volunteers to touch Rajveer’s feet if it makes him leave them alone.

However, Rajveer asks all the guests to leave and says they should return back to the same place in a week because that is when he will be marrying Ajooni, making her Ajooni Bagga from Ajooni Vohra.

The atmosphere at Ajooni’s House gets quiet.

Even Ajooni’s Aunt, Bindu, suspects Ajooni of knowing Rajveer since nobody comes to anyone’s house with a gun.

However, Ajooni’s Dadi saves her back and tells everyone that Ajooni hid this information so nobody has to worry.

Ajooni reveals she only saw Rajveer for the first time during the Kirtan and then he barged in her auto rickshaw with a ring the next day.

At the night, Rajveer and his friends create noises, singing "Dilwale Dulhania Le Jayenge" by banging utensils outside Ajooni's house.

Subash gets angry and decides to consult his student, Manjeet Singh Chabhra, who is a policeman.

The next day, Manjeet arrests Rajveer without an arrest warrant since Rajveer has no license for the gun he owns.

However, at the police station, Manjeet gets frustrated by Rajveer who mocks him saying Manjeet should do "Kapal Bharti"(breathing exercise) to control his anger.

After Rajveer gets locked up, Kukoo and Rajveer’s other friend say now that their lion (Rajveer) has been locked up intentionally, only a "Babbar sher" can come to Rajveer rescue by the name of Ravinder Singh Bagga.