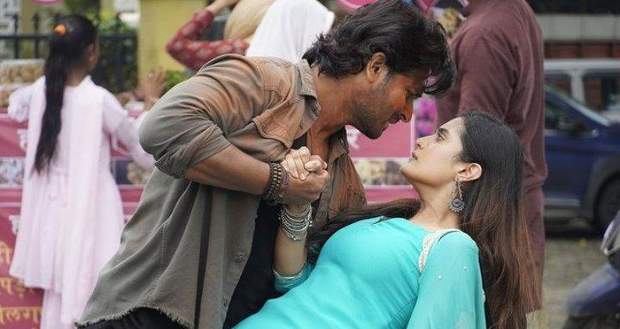 Today's Ajooni 26th July 2022 episode starts with Ajooni’s grandmother cycling very happily in the morning and greeting everyone she knows.

Soon enough, she spots her friend Harminder who seems in a bad mood.

Harminder informs Ajooni’s Dadi that people are coming to see her daughter Kiran for marriage while Ajooni’s grandmother scolds Harminder for marrying Kiran off at the age of twenty.

The discussion then turns to Ajooni who is twenty-four and hasn’t been married off.

The scene shifts to Ajooni who sings Gurbani every day at the Gurudwara.

An old man compliments Ajooni’s singing while a little girl asks him what the name Ajooni means.

The elder says Ajooni means God’s avatar who has taken birth again to replace the evil and do good on Earth.

Meanwhile, Ajooni’s mother, Neeru, can be seen scolding her husband jokingly and her daughter, Ajooni’s younger sister, who is always busy watching TV.

On the other hand, Ajooni and her friend get stuck on the road with two roadside Romeos wanting to take Ajooni with them.

Ajooni cleverly asks them to play a round of fist fighting (Panja) and says whoever wins it can be Ajooni’s.

The boy who wins it does Bhangra in happiness but becomes surprised when Ajooni suddenly ties a Rakhi around his wrist.

Coming back home, Ajooni’s grandmother lies and tells Ajooni she has made Sri-Lankan Pulav.

However, Ajooni catches Dadi’s lie and says it is made of leftover rice.

When Ajooni and her friend inform Neeru about the roadside lovers, Neeru reminds them to be cautious as tying Rakhi’s around their wrist is not a permanent solution to escape them safely.

Rajveer Bagga, the male hero, is introduced fighting a contemporary of his area of wants to the King of Rajveer’s area.

After beating him up, Rajveer carries him to the hospital for stitches.

However, the doctor feels absurd because he knows the man must have been involved in a fight.

Later, it turns out that the doctor Rajveer visited is Ajooni’s fiancé, Avinash.

One of the babas who sit on the road with a peacock feather predicts that new love is incoming in Rajveer’s life.

However, Rajveer brushes off Baba’s prediction and moves on.