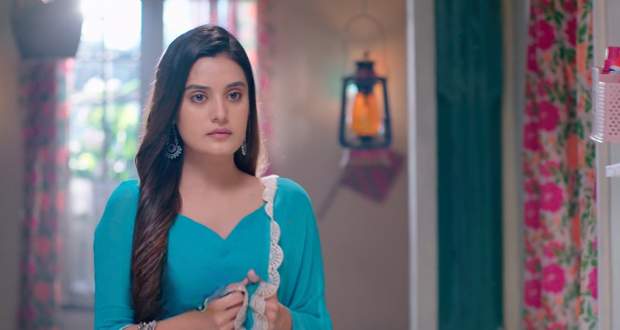 He imagines her everywhere and stares at his hand under stark sunlight while his friend teases him about what has made him like this.

Rajveer replies that it is love at first sight for him, making him imagine going on a car ride with Ajooni, spending time in the fields, sitting on the hood of the car and cuddling with her while watching the sunset, etc.

Rajveer finally takes a bath and relaxes in the tube well, and plans to get some information on Ajooni's name and address.

He tells his friend that now he wants to drown himself and get intoxicated with Ajooni's love.

Meanwhile, preparations are going on in Ajooni's home for a Satyanarayan Puja and his brother returns home after giving an interview.

On the other hand, Rajveer can find Ajooni's address after he asks the shopkeeper whether he knows a girl who is fair in colour, wears Salwar Kameez, has black long hair and an innocent aura.

When Rajveer reaches Ajooni's home, he is interrogated by Subhash, Ajooni's father.

Rajveer lies and says he actually came to meet Subash's neighbour but came inside to attend the Puja after hearing the bells.

When Ajooni enters the room, Rajveer's heart rings with desire and infatuation.

However, he relaxes when he learns that it is Ajooni's brother only.

Later, Avinash calls Ajooni who shows him the set-up done for the Puja.

Rajveer follows Ajooni like a lost puppy and touches his head against the ground beside Ajooni in front of the deities.

Later, Rajveer goes to a Devi temple and in a filmy style asks the goddess she must be wondering why a Gunda like Rajveer who threatens people with guns and writes his destiny is here to ask for something.

Rajveer reveals he wants the goddess to put Ajooni on his lap as a blessing and gets happy when a flower hits his head, confirming his wish.

Meanwhile, Rajveer also bribes a man to give Rajveer his shop that is just adjacent to Ajooni's house.

Rajveer confesses he wants to watch Ajooni as long as he wants first before making her his.

When Ajooni comes on the terrace to set the clothes dry, Rajveer clicks Ajooni's pictures who is busy talking to her friend about Avinansh.