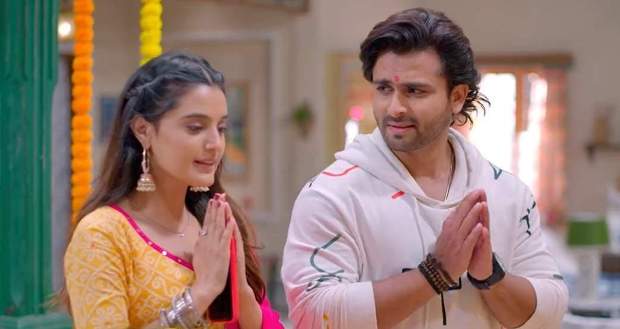 Ajooni’s younger sister, Meher, stares at Rajveer angrily and tells Ajooni she will show him his place.

However, Ajooni tells Meher to drop the matter, and the sisters go inside the house to meet Avinash.

Neeru becomes anxious since Avinash is taking Ajooni out for a coffee and expresses her concern to Ajooni’s Dadi.

After chatting with Ajooni’s parents, Avinash takes Ajooni out on a coffee date in his car.

Rajveer’s friends stare at Avinash and say they have seen Avinash somewhere.

Waking Rajveer up from his nap, both his friends inform him that Ajooni has gone out with the doctor.

Rajveer immediately follows their car and reaches the jewellery store Avinash is buying Ajooni’s ring from.

Selecting a ring worth twenty-five thousand rupees, both Avinash & Ajooni leave the store when he gets an emergency call from the hospital.

Avinash goes to the hospital by a car while Ajooni via an autorickshaw.

Meanwhile, Rajveer talks to the store owner and asks him to show him the most expensive ring.

The owner shows Rajveer a diamond ring worth of one and a half lakhs and Rajveer buys it instantly, saying Ajooni deserves better.

Stalking Ajooni, Rajveer blocks the auto’s way with his jeep and barges inside the auto much to Ajooni’s surprise.

Ajooni gets angry and tells Rajveer to get out of the car but he says he has to show her something.

Revealing the sparkling diamond ring to Ajooni, Rajveer says he wants to slide the ring on her finger and get engaged right here in the auto.

Ajooni threatens Rajveer that she will beat him up with her slipper but he keeps on smiling.

Her Dadi asks what is the matter and Ajooni spills out whatever happened with her.

Meanwhile, Rajveer is confident that she will make Ajooni his.

However, his friends laugh and ask him what their Bhabhi meant by “uncultured stupid creature” but Rajveer jokes and says he just heard her say, “See you soon.”