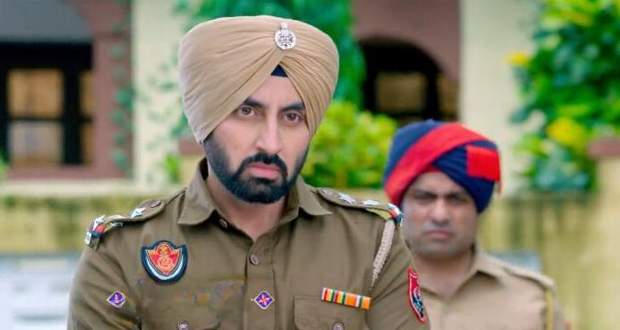 Today's Ajooni 2nd August 2022 episode starts with Rajveer’s father, Ravinder, scolding a town man for his mistakes and asking him to dunk his face in a tank of water.

Ravinder Singh Bagga, Rajveer’s father, is a respectable man of Haryalipur and is also known as the "Babbar Sher" of the area.

Just then, Ravinder’s assistant gets a call from the police station about Rajveer’s arrest in the lock-up.

Meanwhile, there is a tense atmosphere at Ajooni’s home.

Bindu asks Neeru why she looks so worried as she removes wasted leaves from the Palak.

Neeru reveals that since Avinash’s parents haven’t called them, imagine what other relatives might be talking about.

Ajooni’s Dadi asks Neeru to calm down but she further blames Ajooni for all this, saying if she would have told the whole family about Rajveer before, they wouldn’t have to see this day.

Meanwhile, Ravinder goes to the police station and asks Manjeet Singh Chhabra to release Rajveer since he saw enough air of the lockup.

However, Manjeet just stares at Ravinder and asks him who is he to talk with such authority.

Ravinder laughs and asks his assistant to call the MLA of Haryalipur who orders Manjeet to release Rajveer instantly.

Manjeet has to oblige and gives Rajveer his phone back hesitantly.

Rajveer laughs and smirks and asks Manjeet to come to his engagement which will happen in just one week.

On the other hand, Ajooni cries due to her mother’s hateful words but her father, Subhash, consoles her.

Subash tells Ajooni to be strong and write whatever she is feeling in a diary.

Meher, her younger sister, also calms Ajooni down and hugs her, saying she doesn’t care what anyone says about Ajooni because she knows that Ajooni is truthful.

© Copyright tellybest.com, 2020, 2021. All Rights Reserved. Unauthorized use and/or duplication of any material from tellybest.com without written permission is strictly prohibited.
Cached Saved on: Tuesday 2nd of August 2022 09:32:16 AMCached Disp on: Saturday 13th of August 2022 11:47:08 PM