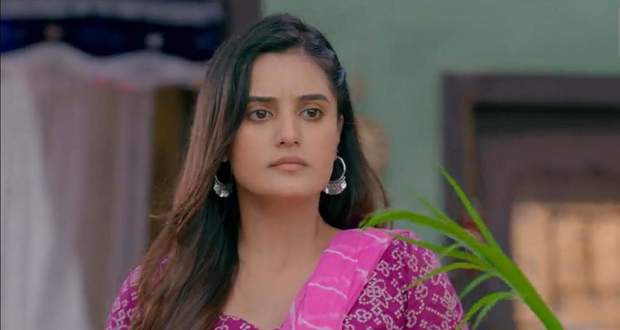 Today's Ajooni 30th July 2022 episode starts with Mehr demands that Ajooni switch off the night lamp instead of studying to call Avinash.

Ajooni refuses to call Avinash as it's late but Mehr asks to dream of him instead.

Later, Ajooni wakes up from a nightmare of past incidents with Rajveer proposing to her in the Auto Rickshaw.

However, Avinash calls her and tries to confess his love to Ajooni but Mehr interrupts them. Avinash cuts the call panicky.

At the same time, Ajooni gets a message from Rajveer to come to the window otherwise he will stay there all night.

Ajooni scaredly opens the window while Rajveer flashes the car headlights on Ajooni and looks at her smiling creepily.

On the next day, Rajveer is stalking Ajooni while she shops for her engagement. But Ajooni sees Rajeev watching her shop from CCTV Cameras.

While waiting for the tikkis to be ready the salesperson comes and gives Ajooni the same dress she refused because of its price.

Ajooni refuses to take it but the salesperson pleads with Ajooni to keep it and shows his bruise given by Rajveer.

Ajooni throws the dress on the road.

At the same time, Rajveer enters the car with his friends andpicks up the dress and tells Ajooni to keep the gift.

Ajooni threatens to call the police but he whistles and the policemen going on the motorcycle come and greet him.

Ajooni is left shocked, accepts the dress with shaky hands and leaves with Mehr.

Rajveer's friend advises him to kidnap Ajooni but he angrily slaps him and tells him to talk with respect about his bhabhi.

Later in Ajooni's home, Mehr tries to tell her mom but Ajooni changes the subject. Biji asks them to tell her what the matter is.

Mehr tells Biji about Rajveer and Biji inquires why they didn't call the police. Mehr explains they try to do so but the policemen are Rajeev's friends.

Ajooni tells Biji to keep her calm because of her engagement but Ajooni is afraid of rumours spreading.

The next day, Avinash is about to put a ring on Ajooni's finger but Rajeev fires a shot in the air.

Rajeev's friends start to threaten Rajeev while Ajooni's father asks him what he wants.

While swirling his gun in everyone's direction Rajeev declares he wants Ajooni.