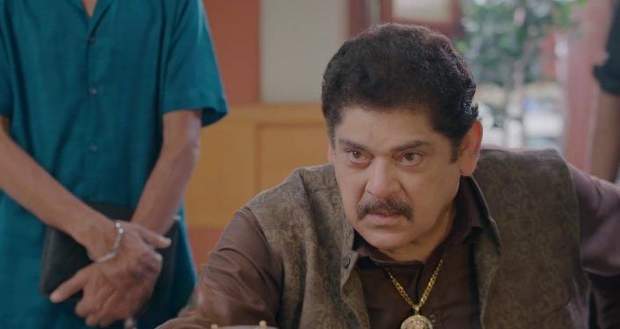 Today's Ajooni 3rd August 2022 episode starts with Rajveer getting released from the jail.

Ravinder Singh Bagga, a local politician and Rajveer's father, tells him he is delighted to see his son go inside the jail since a little bit of attention from the media comes.

However, he warns Rajveer not to get too much attention for his actions since no one knows when they turn into a badge of disrespect from society.

Ravinder then asks Rajveer what led him inside jail but Kukoo answers on behalf of Rajveer, saying it is a matter of the heart.

Ravinder then advises Rajveer to go out with plenty of girls but only get married to one who comes from traditional families because a woman has only two places to reside, one on a man's wrist and one under his feet.

However, Rajveer doesn't agree with Ravinder's notions and says a girl should reside in a man's heart for utmost protection.

Avinash doesn't call but comes with his father and tells Ajooni's family he will not back down from marrying Ajooni.

They also write "6 Days to go Until the Wedding" on Avinash's car who leaves angrily.

The next day, Ajooni finds a pamphlet with the newspaper in front of her house.

The pamphlet has Ajooni and Rajveer's photograph, saying "5 Days to go Until the Wedding".

Subash asks what Ajooni is hiding but after she sees her father so upset, Ajooni goes out to confront Rajveer directly.

She tears the pamphlet in front of his face.

However, Rajveer doesn't blame her but Avinash who is an obstacle in his union with Ajooni.

Rajveer then sends an army of thugs who go to Avinash's clinic and beat him up.

Ajooni hears Avinash get beaten up on the call and worries when he doesn't reply.

© Copyright tellybest.com, 2022, 2023. All Rights Reserved. Unauthorized use and/or duplication of any material from tellybest.com without written permission is strictly prohibited.
Cached Saved on: Thursday 26th of January 2023 03:43:49 AMCached Disp on: Monday 6th of February 2023 05:36:37 PM