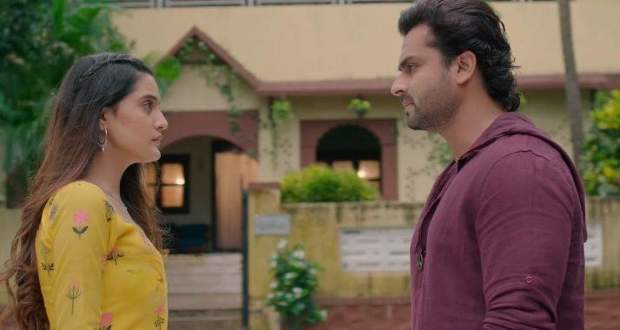 Today's Ajooni 4th August 2022 episode starts with Avinash getting hurt after he is beaten up by the goons.

However, he doesn't know that they were sent by Rajveer.

Ajooni gets worried and goes out to see Avinash herself.

She gets upset when she finds him on the bed in his own clinic like a patient, getting treated with bandages.

Ajooni tells Avinash she is sorry because she has a realization that there is Rajveer's involvement in this.

Rajveer meets Ajooni outside with a stupid smirk on his face while Ajooni is shaking in anger.

She tells Rajveer he doesn't deserve to get married to Ajooni because she hates him so much.

She also says even if God comes on the Earth and tells Ajooni to marry Rajveer, she wouldn't marry him.

However, Rajveer says he is not even scared of God because he loves Ajooni so much.

Ajooni covers her ears to not hear Rajveer's mad proclamation of stalker love and goes home with a beating heart.

© Copyright tellybest.com, 2022, 2023. All Rights Reserved. Unauthorized use and/or duplication of any material from tellybest.com without written permission is strictly prohibited.
Cached Saved on: Tuesday 22nd of November 2022 12:01:09 PMCached Disp on: Saturday 3rd of December 2022 01:46:57 PM