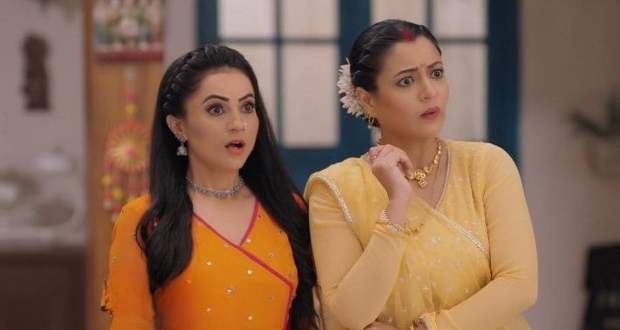 Today's Anandi Baa Aur Emily 10th August 2022 episode starts with an angry Anandibaa deciding not to talk to Emily while allowing her to stay in the house.

Aarav tries to light her up and jokingly says that they will live and go to America together only.

Emily thanks Aarav for his support, blindfolds him and presents him with a surprise making him feel like he is in America as she serves him hotdogs and both of them spend a good time together.

Later Anandibaa is seen looking for Gunjan in the house.

Unable to find her Anandibaa indirectly talks to Emily asking for a jug, glass and chair to tell Emily to inform Gunjan about the last day of form filling for the "Bahu halwa making competition" of the society.

Meanwhile, fua is still looking for someone to slap him and purposely tries to make her angry so that the slap can get him rid of the monkey's curse.

However, she cleverly gives the wrong instructions to Emily.

Later on, Anandibaa and Gunjan are sitting in the same room when Emily comes and informs them that she has successfully registered her name for halwa making competition but turns out that due to the wrong instruction given by Gunjan, Emily has registered her name and not Baa's.

Emily apologises but the name cannot be changed as the form filling time is already over.

Baa gets very angry with her and blames her for doing this purposely and also says about how for the last five years Anandibaa has won the competition and halwa from their house is offered as prasad to the gods.

Hearing all this Emily decides to not only participate but also resolves to win the competition.

© Copyright tellybest.com, 2020, 2021. All Rights Reserved. Unauthorized use and/or duplication of any material from tellybest.com without written permission is strictly prohibited.
Cached Saved on: Sunday 2nd of October 2022 06:45:10 AMCached Disp on: Thursday 6th of October 2022 03:19:59 PM