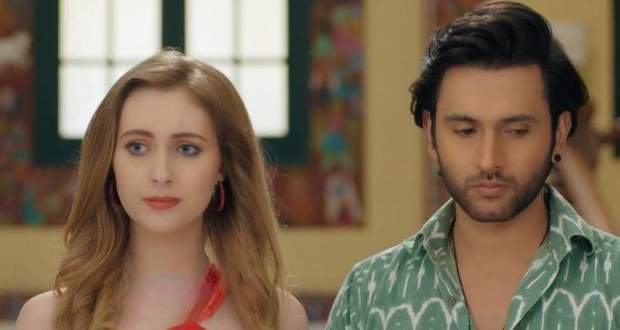 Baa says to Aarav whether Emly thinks she can cook better Halwa than her.

However, Emily says her intentions are not to compete with Baa but to make Halwa delicious so Sanghwani House’s reputation does not get mixed in the soil.

Emily decides to practice making Halwa so she wins Anandi Baa and Gondal’s heart and gets permission to enter the kitchen.

Meanwhile, Pinky and Gunjan blabber with each other.

Gunjan says her whole body is burning but Pinky takes it literally and makes Gunjan drink a lot of water.

However, Gunjan meant to say what if Emily wins the competition but Pinky knows her big sister is a clever fox and won’t let this happen.

Dumb Pinky thinks Emily will throw her and Gunjan into jail and bows to her feet, apologizing.

Pinky puts all the blame on Gunjan but Emily gets confused saying she couldn’t hear Pinky’s words because of air pods in her ear.

The next day, Emily gets dressed in a blue suit and dries her wet hair. Aarav’s feet slide on the floor but Emily saves him.

He falls on top of her and Emily’s breath stops for a second as she stares into his eyes.

Emily says she has to make a "Dulha" and start practicing making the Halwa.

Aarav gets confused and asks what has Dulha to do with Halwa but he realizes that Emily meant to say "Chulha" (stove).

Later, Emily prepares a mannequin and introduces her to Ba as “Anali”.

She tells Anandi she needs her best of luck because she never had anyone to encourage her.

Anandi gets emotional and refers to Anali saying Emily has her blessings to win the competition.

Emily gets happy and leaves but Anandi Baa remains in confusion, saying what if Emily wins the competition for real?

Meanwhile, Pinky tells Gunjan she saw Emily walking toward them with a stick in her dream and freaks out after seeing Emily walk with Mango Tree Stem.

Pinky and Gunjan hide, screaming but Emily says she needs help in breaking the stick so she can prepare a chulha.

© Copyright tellybest.com, 2020, 2021. All Rights Reserved. Unauthorized use and/or duplication of any material from tellybest.com without written permission is strictly prohibited.
Cached Saved on: Saturday 1st of October 2022 11:38:55 PM