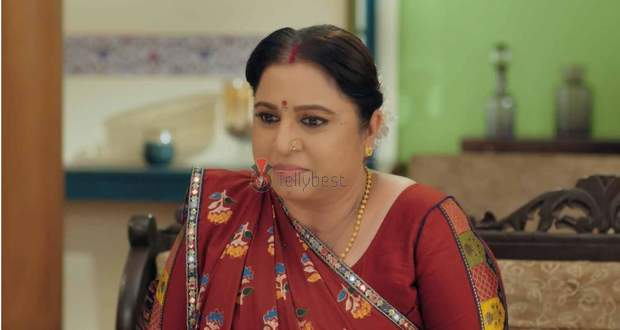 Chaman underestimates Emily’s efforts but Aarav says Emily has even searched how to make Moong Dal Ka Halwa on the Internet.

Anandibaa has the same worry and thinks about what she will do if Emily wins the competition.

Baa calls Emly, "Safedi Ki Chamkar" (White Shine) and keeps on ranting while Gunjan shakes her head in the background.

Aarav arrives and interrupts Baa, saying there is smoke coming out from the other room.

Everyone gathers outside the room and hears Emily scream "Help!".

However, Anandibaa stops Aarav from going into the smoke room to help Emly.

Dumb Pinky who is stuck with Emly closes the windows, saying now Aarav won’t be able to catch them.

Meanwhile, Emly puts a wet cloth around her nose to stop inhaling the smoke while Aarav fearlessly walks into the smoke room to save Emly.

Anandibaa and Gunjan get shocked when Aarav comes out holding Pinky in his arms who stares at him like a lovesick girl.

Gunjan hugs Pinky while Pinky calls Aarav her hero, who is going inside the room a second time to save Emly.

This time, Aarav comes out in Emly’s arms making Anandi Baa stick her tongue out with a shocked look.

All the family members gather around an unconscious Aarav to wake him up.

Aarav wakes up with a smile and tells Anandi her Bahu (Emly) is strong.

However, Anandi Baa dislikes Aarav complimenting Emily so much and asks Pinkudi to glug water down Aarav’s throat to shut him up.

On the other hand, Gulab returns home with Chaman after being thrashed while Kanchan, his wife, congratulates him, saying his wish has come true.

Meanwhile, Emly comes downstairs with Anali (a dummy) and tells Ba she did not know how much smoke a "Chulha" could produce in the room.

Anandi Baa tells Emly not to put any fire now and do her practice of making Halwa under Pinky’s supervision.

However, Gunjan says a half-brain like Pinky along with "Firangan" should not be kept close to fire and volunteers to help Emly.

Later, Gunjan hands out the recipe detail of Moong Daal Halwa to Emly, saying she found it in Baa’s room but Emily feels it is like cheating.

However, Gunjan relieves Emly’s worry and makes her emotional.