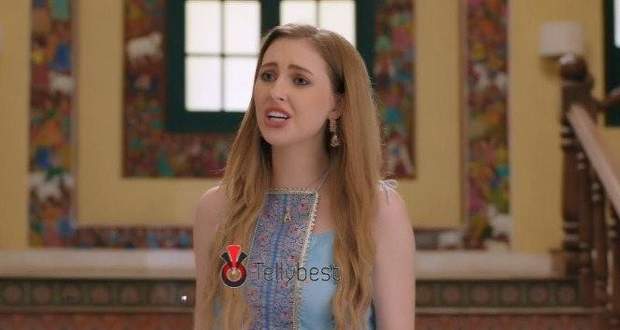 Innocent Emily doesn’t realize that Gunjan wants her to lose whereas Gunjan makes Emly believe that if she wins the competition for Anandibaa, she would be able to enter the kitchen and cook delicious food for Aarav.

Meanwhile, Aarav is threatening someone on the call to get his VISA done as soon as possible.

Feeling lost in her happy thoughts, Emly hides the recipe paper when she sees Aarav.

However, Aarav says if Emly lies to her husband, she would become a frog in her next life.

Emly purses her lips and tells Aarav about the recipe given to her by Gunjan but Aarav thinks it is cheating.

He tries to persuade Emly not to use it since he wants Emly to lose so he can get a free ride to America with him.

However, Emly’s mind is firm to win the competition.

On the other hand, Gulab dreams of Anandibaa slapping him and his luck opening up.

However, half of his dream comes true when Anandibaa comes and says how dare he call Aagya, Baa’s Chamcha (servant) but applies scared ash on Gulab’s forehead, instead of slapping him.

Meanwhile, Aarav takes Chaman’s help to steal the recipe from Emly’s room while Aarav distracts her.

Aarav makes up stories saying Emly would have to decorate the Halwa with five almonds, cashews, and raisins so Chaman can go into her room without being noticed.

However, as soon as Chaman gets up to run into Emly’s room, Emly’s face gets tilted to her side.

After a lot of trial and error, Chaman finally retrieves the recipe paper and gives it to Aarav.

He says Aarav should thank Chaman since Chaman put Aarav above his father.

Aarav says how can Chaman call him his father but Chaman clarifies by saying, his father never told him to steal but he stole today only for Aarav.

A second later, Emly informs Aarav that her recipe flew and she is not able to find it.

Pinky hears this and tells Gunjan about it. Gunjan cannot believe how dumb Pinky can be and slaps her cheek, saying this is no good news since the recipe was not authentic.

Gunjan fears Anandi baa finding it and throwing Gunjan out of the house.

Just then, Baa enters the kitchen and finds Gunjan apologizing to her with folded hands.