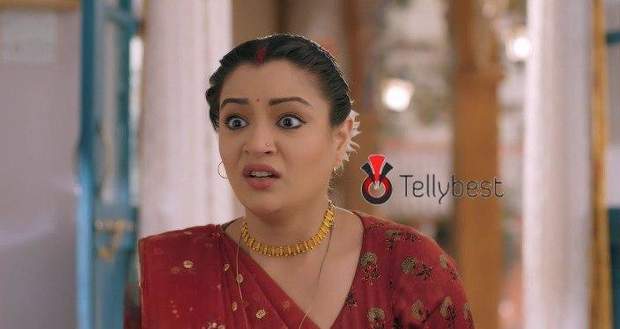 However, Anandi Baa is angry with Gunjan and rather asks Gunjan why she ordered a lot fewer things for her.

Gunjan smiles, relieved to know that Anandi Baa is talking about something else.

Meanwhile, Emly freaks out over the lost Halwa Recipe.

The recipe is in Chaman’s hand but he accidentally drops it on the ground, making Aarav snatch it.

However, Emily asks Aarav how did he find it.

Later, Emily tells Gunjan she almost lost the recipe but found it thankfully.

Gunjan says she heard this news but advises Emly not to drop it anywhere now since there is only one single copy of this recipe.

Emily gets confused and asks Gunjan how will she be able to cook if she keeps holding the paper in one hand.

Clever Gunjan asks Emly to do the cooking with her right hand while she holds the paper from her left.

On the other hand, Gulab Das (Kanchan’s husband), has tried to think of a way to receive a slap from Anandi Baa.

According to an astrologer, Gulab’s good luck will open only after he gets a slap and this time, he is thinking of burning the curtains, bedsheets, pillows, etc.

However, Kanchan stops her and he goes dancing down the hall with a big burning lamp in his hand.

Anandi Baa freaks out seeing Gulab like this and asks him what is he doing. Gulab’s plan is to put the sofa on fire.

However, Aarav gets the idea to burn Emly’s recipe in the same lamp.

He confuses Anandi Baa to think what will happen if the whole house gets burnt due to Gulab’s nonsense.

When Baa has her back turned against Aarav, Aarav burns Emly’s recipe.

Emly gets extremely sad and runs to her room to pack her things.

Chaman's prediction comes true when Aarav says it is not good to test a girl from a different country like this.

Getting emotional, Aarav says he will help her.

Imly gets happy and hugs Aarav.

Later, Aarav and Emly try to cook Halwa together but Aarav asks Emily why she is still holding a blank yellow paper.

Emily says she has to hold it so Gunjan Bhabhi does not suspect her of losing the recipe again.

However, Gunjan is already eyeing Emly with Pinky.