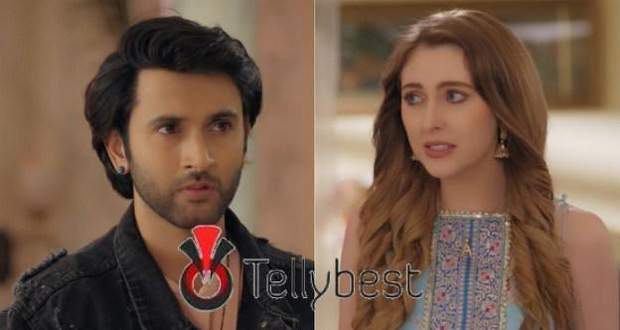 Gunjan asks Pinky to mix a bowl full of salt into Emily’s Halwa kept in Kadai (Cauldron) so it gets ruined.

Meanwhile, Anandibaa calls Gunjan and expresses her concern about whether the Halwa made by Emily would be liked by everyone or not.

However, Gunjan underestimates Emly by calling her "Safedi Ka Chamak" (white shine) and tells Baa to call people from Gondol to taste it.

Everyone gathers in the Sanghani House to taste Emly’s Halwa while Gunjan and Pinky smirk at each other.

When Gunjan asks Pinky whether she did the task of mixing salt into Emly’s Halwa properly or not, Pinky calls Emly of being such a clever girl for arranging the Halwa in a side dish, and not in the cauldron.

Pinky added the salt to the empty cauldron while Emly and Aarav were busy garnishing the Halwa.

Meanwhile, Emly serves everyone the Halwa to taste and the reaction is pleasant.

When Anandibaa asks everyone whether Emily’s dish is worth sending into the cooking competition, everyone says a big yes!

However, Gunjan beats up Pinky for not following proper instructions and makes a Halwa quickly by adding salt to it.

She then replaces the Halwa submitted by Aarav and Emly with the one made by her and walks home happily.

Later, Emily and Aarav weakly tell Anandibaa that they lost the competition.

Gunjan tells Emly she should not have been overconfident to challenge Anandibaa’s cooking skills and will have to leave the Sanghani House now.

Anandibaa fully agrees with Gunjan and rolls her head, asking Emily to repeat the conditions.

Anandibaa then asks Emily if she wants a helping hand to pack her things while Gunjan celebrates Emly’s loss in the background.

© Copyright tellybest.com, 2020, 2021. All Rights Reserved. Unauthorized use and/or duplication of any material from tellybest.com without written permission is strictly prohibited.
Cached Saved on: Saturday 1st of October 2022 10:32:40 PM